Cryptocurrency is a new type of internet money and a popular form of investment. Its qualities as a store of value often see it compared to gold, with the obvious difference that it is entirely digital.

We’ve dedicated an entire article to explaining how a cryptocurrency like Bitcoin can have no physical properties, yet work as an excellent store of value, so we aren’t going to unpack that here.

Tl’dr: Bitcoin is backed by something meaningful – thousands of computers that work to secure the network.

What is relevant is that Bitcoin’s revolutionary design and youth - just twelve years old - relative to gold - in use for over 6,000 years - means that its complex value proposition is still being understood and validated.

People expressing their opinion - by either buying or selling - within this inherent uncertainty is what makes cryptocurrency so volatile, especially when looked at over short time frames.

Historically, however, Bitcoin has increased in value, despite drawdowns along the way. Bitcoin can fall dramatically within seconds, as well as over prolonged periods (known as a Bear market), but it has always bounced back eventually before climbing to new highs.

Between 2009 and 2020, anyone who bought BTC (the currency symbol for Bitcoin) and held onto it would be in profit. This is remarkable for any asset, not least a cryptocurrency that is “backed by nothing”.

Holding Bitcoin for the potential of long term appreciation, rather than speculating on short term gain, is described as Passive Ownership. In our journey through ways to earn cryptocurrency this is the first point where you are risking your capital rather than just your time. Past performance doesn’t guarantee future success, so that risk is real and should be taken seriously.

Passive Ownership may sound a little pedestrian, but overcoming your desire to play the market might be the best financial decision you ever make. It does require an initial investment - with inherent risk - but once you have bought (and we have an article explaining how) there is little more you need to do beyond making sure you store your cryptocurrency securely (addressed in a separate article) other than trusting in it fulfilling its properties as a store of value.

What it means to ‘hodl’ and ‘cost average’

Passive Ownership is quite a mouthful, luckily the Bitcoin community has adopted a simpler and much more relevant equivalent - hodling.

What does hodl mean?

‘Hodl’ is simply a deliberate misspelling of ‘hold.’ If you hodl bitcoin, it means you are storing it in a wallet and are in no hurry to sell it.

This makes you a hodler. It has become one of Bitcoin’s defining memes. You can read the story of how hodl became the crypto community’s defining meme in the Learncrypto blog.

Hardcore hodlers wear this title as a badge of pride. Hodling bitcoin doesn’t mean keeping it in your wallet forevermore: it simply means resisting the temptation to sell during periods of volatility.

Buying bitcoin and then hodling to accrue long term profit sounds like the easiest thing in the world. In fact, it’s surprisingly hard to resist the urge to cash out both when the market is rising or falling, or to feel that you can second guess the volatility and make more profit by actively trading the ups and downs..

As you’ll see, trading requires a very specific skill set and as the infographic for this section shows, involves much more significant risk. Learn Crypto even dedicates an entire separate section to explaining what is involved in trading cryptocurrency..

Hodling simply requires patience, and though it is the antithesis to the constant search for profitable entry and exit points that trading requires, it does require a single crucial decision of when to enter the market and access to a lump sum investment.

Committing a lump sum at a specific point in time can feel a little scary, especially if you are concerned about buying at the top of a bull market.

Luckily there is a very sensible alternative to deciding on a single point of entry, known as cost averaging.

Cost averaging, also known as dollar cost averaging, or DCA for short, is a way to gain exposure to crypto that mitigates the risk of buying at the top of the market, by making regular, small and consistent investments over time,

Imagine you intend to invest $1,000 of BTC, but are uncomfortable about when to buy, because of the volatility, and don’t have access to a lump sum.

Instead, you could choose to cost average, buying $100 BTC per week for 10 weeks, at exactly the same time, without even considering the price. During that time, the price of bitcoin may go higher or lower than your initial entry price, but the cost average of your purchase would even out.

Bitcoin cost averaging has been shown to be one of the most profitable investment methods over several years, consistently outperforming most other strategies.

Websites such as dcabtc.com allow you to calculate the profit you would have made by cost averaging into bitcoin at any point in time. Using a three year time frame from February 2018 to February 2021 dollar cost averaging would have produced a 392.9% return on your investment.

You can even compare your investment to other assets such as Gold, which would have produced a mere 23% return, which isn’t adjusted for inflation.

The benefits of cost average cryptocurrency like Bitcoin are such that many exchanges include recurring purchase functions to facilitate DCA for you. You just need to connect a payment method and let time and the store of value properties of Bitcoin do their work. 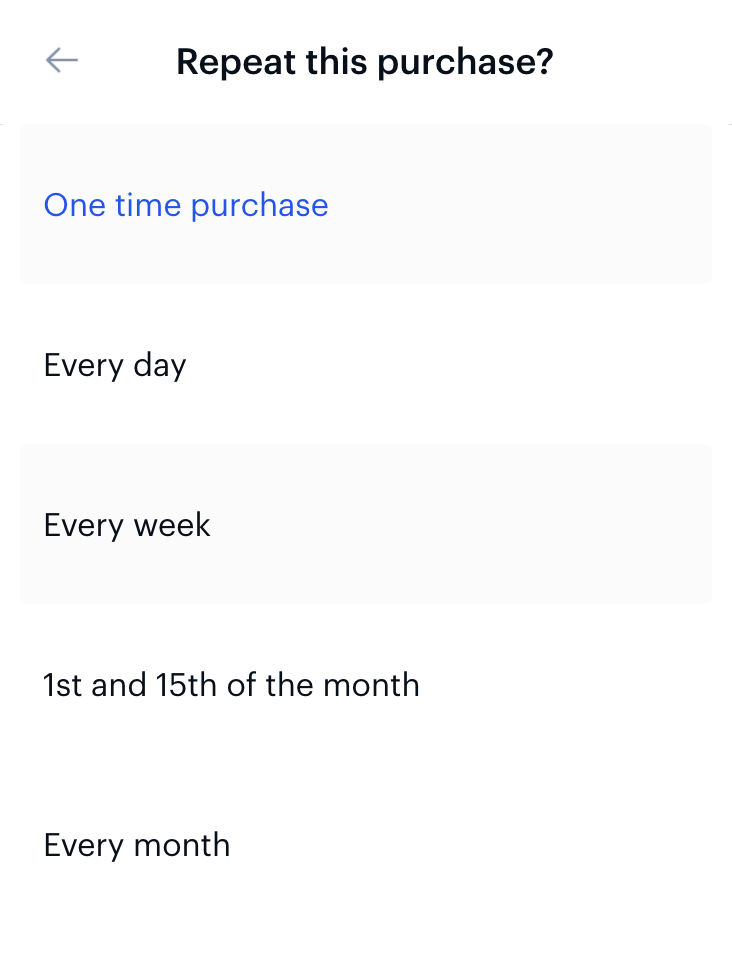 Summarising the Benefits of DCA

Reduced risk of buying the top - One of the big benefits of DCA is it removes the pressure and uncertainty of when to invest a lump sum, and the fear of buying at the top of the market.

Crypto has proven to be a great long term investment, but is extremely volatile, so a DCA approach can average out the peaks and troughs.

No need for a lump sum - Many people look at the price of Bitcoin and mistakenly think you have to buy a whole coin. Our TL;DR section gives the response to that and other myths, but in short you can buy fractions of a Bitcoin (or other cryptocurrency). DCA essentially structures small purchases over regular intervals and is great for those that don’t have access to a lump sum.

Less stressful - There is no getting away from the fact that cryptocurrencies are extremely volatile. So even if you have done your research and think that the long term prospects for adoption and increase in value are good, you are still likely to experience periods of doubt and stress when the price - and your investment - are declining.

By spreading investment over time, and using an automated buying option, you can put this to the back of your mind. Risk doesn’t disappear, but it isn’t anywhere near as intense or consuming.

Time to learn - Cost averaging is a gradual process of giving you investment exposure to cryptocurrency. You might look at it as taking the slow and steady tortoise like approach, rather than the full-throttle more risky hare-like trading option.

Slow and steady gives the opportunity to learn as your stack slowly grows, and over time as the volatility evens out, you may gain the confidence to consider more advanced strategies for investing.

What are the downsides to DCA?

Doesn’t eliminate risk - Though DCA is a good strategy to mitigate volatility in buying cryptocurrency, it doesn’t remove risk. You can employ DCA and lose money because prices aren’t guaranteed to keep going up. The DCA examples provided are for Bitcoin, which has a longer history and clearer value proposition that most other cryptos. Using DCA for a speculative coin won’t mitigate inherent weakness in its design or use case.

Requires Patience - As mentioned above DCA is the slow and steady tortoise like approach to investing in crypto - it requires patience. This might seem frustrating, especially when Twitter is full of people bragging about massive dramatic profits during bull markets.

Cost Averaging means that you’ll never time the exact bottom of the market, and when the market is experiencing surging prices a lump sum investment would likely prove more profitable. The whole point of DCA is that it is impossible to know with certainty when conditions are right for a single entry, so you’ll just have to accept that you won’t fully appreciate upswings, but will benefit once you’ve eventually been through both a bear and bull market.

Though cost averaging is intended to be simple, there are more advanced strategies you can use. These focus on adjusting the amount of your regular investment dependent on market conditions.

As already mentioned above cost averaging doesn’t perform best during a surge in pricing, but how do you know the market is overheating?

Another way to look at this is thinking about whether price is performing way above, or below a long term average, which trading tools can automatically tell you, or using a Relative Strength Index (RSI) or the degree to which reliable models like Stock to Flow are moving above/below expectation.

Our section on how to trade cryptocurrency looks at moving averages and technical indicators in much more detail so head over there to understand what is involved, and if you are just getting started with DCA wait until you have gained enough of an understanding of the process before adjusting your regular purchase level.

In the next guide, we’ll look at how to earn cryptocurrency, and increase the size of your holdings.