How to trade crypto: Where do crypto prices come from?

In the first article of this series on how to trade cryptocurrency we distinguished between thinking about risk and opportunity - in terms of short term price volatility and long term asset performance.

In general, focus on the long term is considered Investing, while executing strategies over a short time frame is what we mean by Trading.

Trading requires a specific type of analysis because the focus is solely on short term price volatility, which  is driven by different factors to those that play out over months and years.

This is known as Technical Analysis, and in order to understand it you have to start with the very basics, such as what price is, and where it comes from.

What does bitcoin’s price represent & where does it come from?

Staying focused on bitcoin as our example, price is a measure of the perceived value of bitcoin in relation to an existing currency (such as the Euro) and is established from the interactions of buyers and sellers.

The price relationship between two assets is called a Trading Pair such as bitcoin and the Euro which is shown using three letter ticker symbols:  BTC/EUR

Perceived value is entirely subjective, but the most common view is that bitcoin’s value comes from its potential to fulfil the function of a new type of internet money i.e a store of value and a medium of exchange.

Buyers’ perception is that bitcoin’s price (as valued in Euros) will rise, that it is undervalued in relation to its future potential as a new money, but opinion will vary as to what the right price is to buy at a specific point in time.

Sellers already hold bitcoin but are willing to sell them, feeling that the relative Euro price is more likely to decline in the short term or there are better relative opportunities for which they want to release their capital; each seller will hold a different opinion, as to what the right price is to sell at.

Where the opinion of these two groups - buyers and sellers - meet, a Euro equivalent price is established - the highest price that a Buyer is willing to pay, is matched with the lowest price a Seller is willing to sell at, and an exchange takes place.

You'll see price described as the Spot Price because it represents the price that buyers and sellers are willing to accept on the spot i.e there and then.

As markets for an asset mature, other price mechanisms emerge, known as Derivatives which enable speculation on the price at some point in the future.

So called Futures are a key part of price discovery and the introduction of bitcoin futures in December 2017 is considered as a key milestone, and prerequisite for other bitcoin related financial products such as an Exchange Traded Fund (ETF), giving investors the opportunity to invest in a fund that simply tracks bitcoin's price, but without actually owning any.

The process of identifying a fair value for bitcoin is called price discovery. Every market participant will in theory be utilising all available information about bitcoin - Technical, and Fundamental - as well considering the behaviour of other market participants to discover the true price.

We’ll unpack the influences on price discovery later in the section, but at this point our attention is just on introducing the idea that price is discovered by market participants and trading facilitated by exchanges.

Exchanges match buyers and sellers - looking to express their opinion about price via trades - continuously 24/7/365, generating bitcoin’s price - and this is where price comes from; an agreement on perceived value at a specific point in time..

Each exchange platform functions independently, matching the supply (sellers) and demand (buyers) of its own customers,; there is no single source of price truth for bitcoin outside of exchanges.

Price aggregators, such as Coinmarketcap, pull in prices from the largest exchanges and use a weighted average - taking into consideration the volume of transactions - to produce a broad price value .

You'll see from the image below that there is price differential among the top ten exchanges contributing trading volume for bitcoin. That difference is greater where the Trading Pair is different. 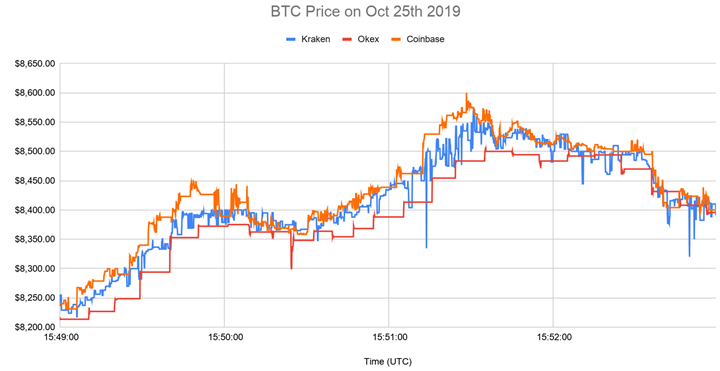 The aggregated exchange data from Coinmarketcap can be considered reliable enough to represent a price benchmark for bitcoin but as the ability to buy bitcoin varies around the world, price discovery can be distorted.

Where market conditions are the same, the price across exchanges won’t differ greatly, which is the sign of an efficient market. If not, users would simply buy at the lowest price on exchange A and sell at the highest available price on exchange B (aka arbitrage).

Compared to more mature assets - like gold or fiat currencies - bitcoin has a long way to grow, but given billions are traded everyday, its price is becoming more efficient, meaning it rarely trades at a high premium across exchanges. Arbitrage does happen, but is only effective at scale - by professional traders - and not relevant for someone just learning about how to trade cryptocurrency.

There is, however, an important exception to bitcoin's price discovery and the potential for significant variation across exchanges..

Where an exchange exists within different market conditions, such as countries with weak fiat currencies and heavy controls on the exchange/movement of that currency - such as Venezuela, Argentina, Nigeria and Turkey - you’ll actually see the price of bitcoin being much higher as demand is higher.

This recent article from Coindesk illustrates the point, with bitcoin trading at a premium in Nigeria given the weakness of the Naira and the attempts to legislate against its use. The premium however, isn’t on bitcoin’s price, rather the informal conversion (black market price) of the Naira to the Dollar.

The controls placed on buying/selling in those specific markets obstruct the natural process of price discovery, because the demand from people in Turkey can only be met locally. Arbitrage is difficult because of the logistics of getting access to buy/sell across these markets.

Buying Over the Counter (OTC)

So we can now understand, in a very basic way, how bitcoin’s price is reached, through the interaction of buyers and sellers at exchanges. Exchanges aren’t however, the only way to buy bitcoin.

Where an individual or organisation wants to buy or sell a large amount of bitcoin, they may not want to go through an exchange because there are unlikely to be enough buyers or sellers at the price they want to execute at. And given exchanges expose trading intent (as we'll see below) the simple act of placing an order on an exchange can move price.

This type of transaction is described as OTC - Over the Counter - happening outside of the regular exchange market mechanism. Trades are negotiated through a broker, and involve very large sums. We’ll explain more about OTC as we unpack this section.

The interaction described between buyers and sellers at exchanges is broadcast real-time, save for actual customer detail and the understanding the information is a crucial part of the art of trading.

An exchange will share what price a buyer is prepared to buy bitcoin at, and how much they want to buy at that price. This is described as a Bid.

Alongside the list of Bids, sorted by price, will be the Order Book of Sellers, providing the detail of sell Offers; the price and amount that Sellers are willing to exchange it. This is described as an Ask.

This information illustrates the push and pull impact on price of buyers and sellers. As soon as a Bid and an Ask are matched, a transaction takes place which establishes the price.

The following is an example screenshot of an order book for a Bitcoin/USD trading pair.

As a Trader you are trying to interpret what the Order Book is telling you about aggregate interest, is it unbalanced toward Selling or Buying?. Significant Bids at a specific price suggest support levels or conversely Asks might indicate a point at which price may struggle to surpass.

It is important to note that the Order Book represents Limit Orders, which are trades requested at specific prices for specific amounts. Bitcoin will also be traded through Market Orders, where the buyer or seller is happy to take the best available price at that point.

The Order Book is tabular and fluid so can be difficult to read, though as we’;ll see serious traders don’t do things simply by eye.

To help provide an easy way to interpret what the Order Book is saying, Bids and Asks and their relative amounts are visually represented in a Depth Chart.

The Depth Chart is roughly V shaped, made up of two sloping right angled triangles with prospective buyers on one side (from the Order Book) with the highest Bid meeting lowest Ask of all the prospective Sellers on the other side.

The Depth Chart can make it easier to find resistance levels - where declining a price is likely to stabilise - or sell walls where an increasing price may struggle to overcome a large number of Asks at a given price..

Of course the Order Book and Depth Chart are dynamic. The sentiment of all participants is constantly changing so what you discern from the data is only as valuable as the stability of that sentiment.

So while analysing and digesting charts, you’ll need to also keep an eye of the information that the charts are reacting to. We’ll discuss this later on.

Once the buyer and seller have met at a point that satisfies both - either through Market or Limit Orders - a trade is executed which defines the price at that point in time.

Historic trades are also available as part of a Trading Display and can provide valuable retrospective information, but the most fundamental representation is a Price Chart.

A price chart provides a simple visual clue to price history, as well as the opportunity to derive patterns which can then form the secret sauce of your attempt to predict future price.

Understanding a price chart is the next key lesson in how to trade cryptocurrency.

Next step: What are crypto price charts?