Learning about cryptocurrency tends to follow clear phases; Learn Crypto applies this phased approach in structuring our content around the basics of cryptocurrency.

By now you should have learned what cryptocurrency is and does, then hopefully followed its development and understood different ideas about how and where it will grow, as well its limitations.

The next stage zooms out from the function and development of cryptocurrency to look at ways of measuring how successful it is at achieving its objectives - the macro phase.

When your thinking changes in this way - from micro to macro level - it can enable you to start thinking more critically about whether cryptocurrency is having a meaningful impact, using hard data rather than hype.

Understanding how to measure the health of a given cryptocurrency project may then convince you that you want to invest more time, money or even your career in pursuing a project, or conversely, that it is just an idea with no meaningful user base.

This kind of thinking is how investors evaluate long term opportunities and is described as Fundamental Analysis. We explain more about its specific relationship to speculation in our section on how to trade cryptocurrency.

As Bitcoin is the most important cryptocurrency, and has been around the longest, we’re going to look at measuring its health. You can then apply the same approach to other cryptocurrencies, adapting the metrics based on their differing objectives and designs.

Remember Bitcoin is a new form of internet money, whereas other cryptocurrencies are trying to solve other problems around transfer of value and data, in a decentralised way.

Bitcoin’s health metrics can be broken down to three key criteria, each with a number of metrics that can be used to measure them.

In the very first lesson on the basics of cryptocurrency we explained that Bitcoin represents a new phase in the evolution of sound money, through the achievement of digital scarcity.

Please go back and refresh your memory, if the concept still isn’t clear, because scarcity is fundamental to the success of any store of value or medium of exchange.

Given its critical importance, you cannot simply take it as given that Bitcoin has that property, you have to look at objective measures.

When we talk about scarcity, what we are essentially saying is:

Bitcoin’s protocol - its rules - state that there will only ever be 21 million bitcoin in existence - this is the commitment to scarcity. So how do we measure that?

The Bitcoin network is open source, enabling services like Blockchain.com to look at the number of Bitcoin mined and know exactly what the circulating supply is. 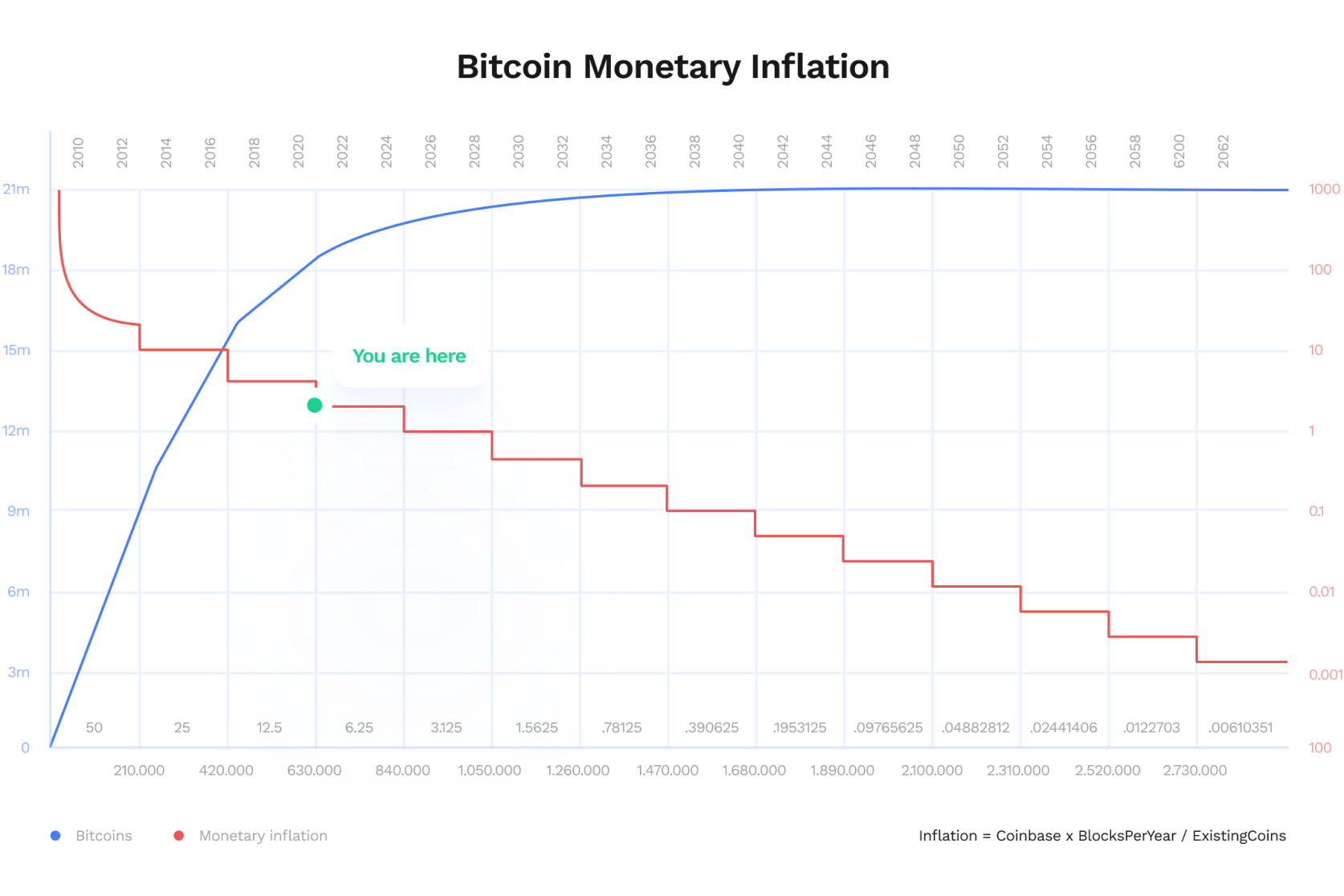 This enables anyone to objectively understand not only the supply right now, but the rate at which that supply has been changing since Bitcoin launched, and whether this means it is on target to reach maximum supply.

This can be checked against the claims made by Bitcoin’s creator - in the 2008 Whitepaper - which over time reinforce the integrity of the claim to digital scarcity.

Based on the predictable growth in supply seen, we can predict the maximum supply of 21 million bitcoin will be reached in the year 2140.

You will often see a chart of the total supply of bitcoin shown in conjunction with a measure of inflation - showing the rate that the supply is growing each year.

Inflation is a measure we should all be familiar with, telling us how much the price of goods, for example, are going up each year.

In order for Bitcoin to be an effective store of value, inflation should decrease over time i.e it should be disinflationary. It must inflate - increase its supply - in order to reach its maximum cap, but it has been specifically designed so that the rate at which it does decreases in a predictable way over time. This issuance model can also be effectively measured.

Previous articles on Learn Crypto have explained the role played by different participants. One of the key participants are Miners who are crucial to the issue of scarcity as they generate new bitcoin - also known as issuance.

It is crucial that issuance is predictable and smooth, and again data can prove this process is happening as expected, enabling users and investors to trust that Bitcoin is working as advertised.

Notice the step changes in the graph above; these four year phases are known as halvings. At intervals of 210,000 blocks the reward a miner receives for mining a new block halves. It began at 50 BTC and following four successful havlings - the latest on May 22nd, 2020 - it is currently set at 6.25 BTC.

If the issuance works as planned then maximum total supply will be reached as expected and Bitcoin can be expected to achieve digital scarcity. At that point, miners will only receive rewards from transaction fees, as there will be no new blocks to mine.

There are however, other factors you should consider in assessing scarcity:

How many coins are lost and therefore unspendable? This is impossible to know with certainty, but estimates put the figure at around 20% of supply. This means the true measure of Bitcoin scarcity i.e spendable coins, is probably only 80% of those known to have been mined.

You might also argue that the 1,000,000 bitcoin estimated to have been mined by Satoshi are unspendable, and should be discounted from supply measures. This however, is subject; just because those coins haven’t moved, doesn’t they may not in the future.

There have already been instances where certain Bitcoin addresses have been blacklisted. The U.S. Treasury Department’s Office of Foreign Asset Control ,has listed specific addresses connected to criminal indictments which essentially cordon-off these from use. They are tied to hacking or scams from North Korea, Iran and China, but could be a sign of things to come. Should this approach broaden, those addresses and any funds held could only be spent at great risk.

There is no point in a scarce money that isn’t secure. The role Miners play is not only to ‘issue’ new bitcoin, they also secure the network and that security can also be measured in an objective way, which is crucial - it is known as Hash Rate.

Hash Rate is the estimated computing power committed to mining over a 24hr period.

Given that Bitcoin works on incentive, the energy a miner expends must be less than or equal to the reward for the work/energy contributed - converted at fiat market rate - or they wouldn’t participate.

We can also agree that in order to break bitcoin, and introduce incorrect transactions into blocks, you’d need to control at least 51% of that mining power.

So the higher Hash Rate goes, the harder Bitcoin is to corrupt and therefore, the more secure it is. Blockchain.com shows the increase in Rate over time. To illustrate the importance of security to Bitcoin’s health, Hash Rate has been shown to be closely correlated with price.

With the means to establish Bitcoin’s scarcity and security, we can essentially measure its effectiveness as sound money. That information, is however, meaningless unless we know whether anyone is actually using it. Given its open source nature, we can access a number of useful usage metrics:

This is the raw measure of the number of unique reference points on the Bitcoin blockchain that funds can be sent to and from. It shouldn’t be confused with actual users as addresses can be created at no cost, and one user can have multiple addresses.

Number of Transactions Per Day

This is more meaningful as it measures actually activity, though doesn’t specify what that activity relates to.

If the average value of transactions increases, this suggests greater confidence in the network.

A UTXO, is an unspent transaction output, essentially what is left after bitcoin has been sent or received. This provides a more refined value that total addresses which could hold no value.

These metrics really only scratch the surface in telling us whether the Bitcoin network is being used and if usage is growing.

If you think for example, that hodling is a great measure of confidence, you can look at the number of UTXOs that haven’t changed for a specific time.

The same might be true of flows from exchanges to and from hard wallets, indicating saving or preparation to sell; or perhaps size matters, and the activity of whale accounts - buying/selling/moving - is considered more telling.

The metrics we've introduced represent the most commonly used examples. They are freely available for anyone with the know-how to harvest from Bitcoin’s blockchain, or any other open blockchain for that matter, but are just the tip of iceberg in terms of potential measures of Bitcoin's health.

For those that really want to explore data further you can run a node and tap into the source of data, slicing and dicing it as you see fit, also known as on-chain analysis. You can also make the most of the wealth of information circulating on Twitter, Reddit, Telegram and other internet sources, and even analyse sentiment with dedicated tools.

The important take-away is that the true test of cryptocurrency is not the how cool or clever a website, app or ICO looks, the level of fanaticism among its supports, or celebrity status of infuncers promoting it, but objective measures of their ability to solve a real world problem - in Bitcoin's case a scarce and secure digital money - and users who are actually putting it to the test.

The desire to measure Bitcoin usage and understand what user behaviour might tell us about its future price, have spawned an entire field of analysis of the supply, distribution and incentives within crypto, called tokenomics, which we'll look at in the next lesson, expanding on what we've learned here about measuring Bitcoin usage.

Next step: What are Tokenomics?