Why they'll only ever be 21 million bitcoin

One of the things you’ll frequently hear repeated by Bitcoin advocates is how important it is that there will only ever be 21 million bitcoin. So why is this fixed number so important, and what is the process that creates new bitcoin towards the maximum supply?

Bitcoin functions as a new type of internet money, offering improvements on our existing monetary system. One of those improvements is a fixed supply - 21 million bitcoin - and a hard-coded logic - that cannot be tinkered with - as to how that hard cap will be reached.

So there are two elements of the fixed supply we need to unpack: why a fixed supply is a preferred quality for money, and the system Bitcoin uses to achieve it.

Note that this article alternates between big B when we talk about Bitcoin, the whole monetary system, and small b, when referring to bitcoin the currency.

Forms of money emerged independently across different cultures because it was a critical precursor to trade. All kinds of different things were tried as money - coconuts, cattle, barley, salt, beads, shells - before gold and silver became established as the most effective.

The reason that precious metals became the apex money, was because for money to be effective as a medium of exchange (essential for trade) it needs to have six key characteristics:

Of the six magical things that make money useful for exchange the last is by far the most crucial (equally so for money to serve as a way of preserving value into the future - a store of value). Imagine the problems we'd face if salt remained the dominant form of money.

Gold ticks the scarcity box and most of the other five, though its weakness is the difficulty in transporting it.

So when Satoshi Nakamoto set about creating a new form of internet money he/she/they needed to find a way of creating a kind of digital gold, but with programmable scarcity; which is a lot harder than it sounds.

If you think about the most familiar digital assets - jpegs, google docs, mp3s - they can all be copied fairly easily. Bitcoin cannot, because it isn’t a file that sits on your phone or laptop, but exists in the form of a spendable record (known as a UTXO - an unspent transaction), which is associated with an address - a place on the bitcoin blockchain - that you can think of like a bank account number.

If you control a bitcoin address, you can spend the bitcoin (UTXO) associated with it. So Bitcoin as a monetary system is the aggregate of all the spendable bitcoin (known as the UTXO set), in other words the total supply of bitcoin.

So the next logical question is how are these spendable records created? Surely whoever controls that can create as much bitcoin as they want? True, if that was controlled by a single person that would be the temptation, in fact that is how existing money works aka Fiat Money.

Fiat MoneyYour government controls money creation and can create as much of it as they like as it isn’t backed by anything (like gold). It is simply a question of key strokes as it just exists as an entry on a centralised ledger. When the government increase money supply it can create inflation, which is a decrease in the purchasing power of money. Without doing anything, everyone who currently holds that money instantly becomes a little poorer. This is one of things Satoshi set out to fix with Bitcoin.

How bitcoin are created

One of the most magical parts of the Bitcoin monetary system is the way in which new bitcoin are created, through a process called Mining. It is quite a complex subject, so for the purposes of this article we’re going to keep it simple, but anyone wanting to dig deeper can refer to our Knowledge Base.

Bitcoin (big B) as a system works according to a set of rules called the Bitcoin Protocol. That set of rules says that there will only ever be a maximum of 21 million, with a fixed number of bitcoin created every 10 minutes as a reward for Miners processing new transactions in a block of data. Blocks of data are chained together with unbreakable cryptographic chains - hence the term blockchain.

The first block was mined in January 2009, at which time the reward was 50 bitcoin. So 50 new bitcoin were added to the supply every 10 minutes. The Bitcoin Protocol states that once 210,000 blocks have been created that reward is cut in half, which happens roughly every four years and is commonly known as a halving or halvening.

Bitcoin has gone through three halvings:

This process will continue until the magic number of 21 million bitcoin is reached, estimated to be around 2140. So the Bitcoin Protocol programs the creation of bitcoin at a fixed rate to a known maximum amount, with no exception. 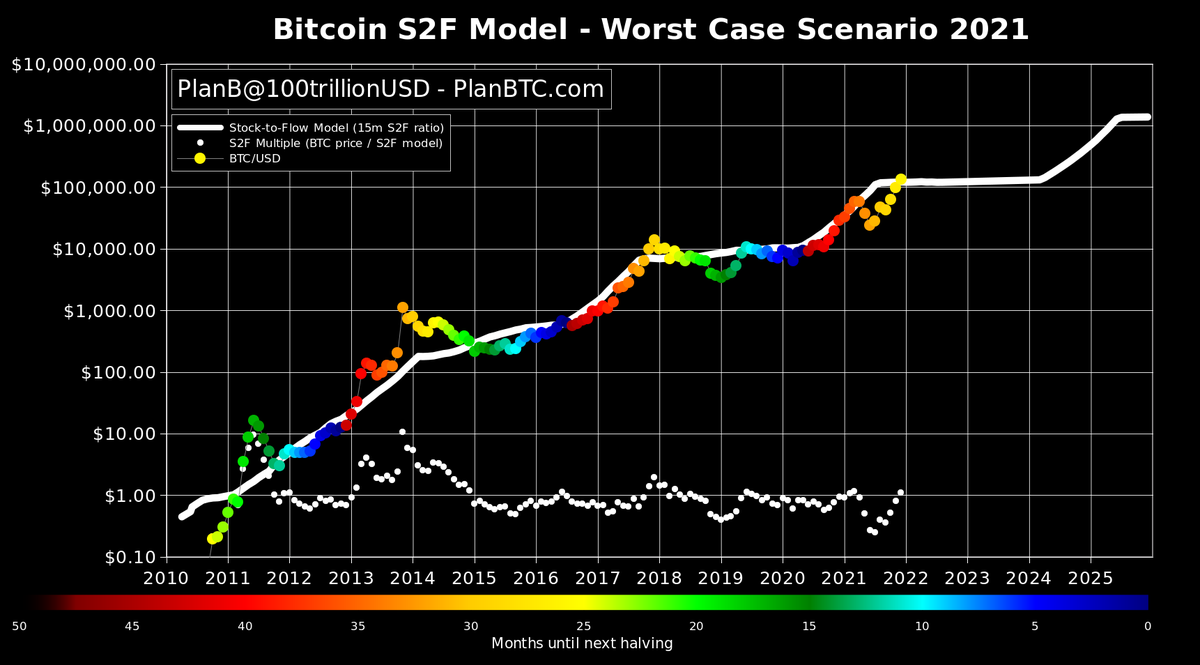 Rather than being inflationary - with a constantly growing supply - eroding value, Bitcoin is disinflationary, as it grows by a diminishing margin, which will eventually reach zero when the magic limit of 21 bitcoin are reached.

The ability to provide programmable scarcity, and effectively store energy - as the complex mining process requires proportional amounts of electricity - makes it a superior store of value to gold, which is why the hard cap is so central to Bitcoin's appeal and the figure of 21 million coins is so significant.

The dangers of centralised information

Where does Bitcoin’s price come from?