How to value Bitcoin? The most popular Bitcoin price models

Bitcoin’s price hit an all time high of close to $64,000 in April 2021, with many analysts predicting it could go much higher by the end of the year. The obvious question for any newcomer considering investing is, how do you value bitcoin? To answer that crucial question Learn Crypto has pulled together the most popular bitcoin price models and their predictions.

For around 6,000 years mankind has used gold as a store of value. The term store of value (often abbreviated to SOV) refers to any item that holds its purchasing power into the future. Gold is effective as an SOV because it possesses key characteristics, such as being scarce and durable.

The problem with gold is that it is an analogue SOV in an increasingly digital world.

Bitcoin is often described as digital gold, because it is the first digital asset with a similar property of scarcity - what is described as unforgeable digital scarcity.

In simple terms, that means it exists in a digital form, but unlike any file on your desktop, bitcoin cannot be copied or created at will - which is a big deal. There is a set of rules for how bitcoin come into existence (mining)  and a cap on the total supply (21 million). Read more here about how Bitcoin works.

If you agree that Bitcoin is digital gold, you can arrive at a simple way to value Bitcoin by looking at the current market for gold and dividing it by the Bitcoin's known maximum supply. This Bitcoin price model is only as good as the numbers we feed in, so we are going to look at two approaches and numbers provided by the World Gold Council.

The best estimates currently available suggest that around 201,296 tonnes of gold has been mined throughout history.

If we simply divide that number by the 21 million - the fixed supply cap of Bitcoin - the total gold supply approach gives a predictive value of $564,375 per Bitcoin. Not a fancy or complicated model for predicting bitcoin’s price, but based on reasonably sound logic, assuming you regard it as an equivalent or better SOV to gold. Our Why Crypto page provides useful data on why Bitcoin has proven to be a superior store of value to gold.

Some argue that using an estimate of the total above ground supply of gold as a way to calculate the value of bitcoin is misleading. A lot of gold is simply ornamental (jewellery) or used in manufacturing, so we should only be looking at investable gold.

Fortunately the World Gold Council gives us a breakdown of the total supply of gold so we can isolate the investable portion. The numbers are accurate for the end of 2020.

If we divide that lower number by 21 million the total investable gold supply approach gives a predictive value of $220,106 per Bitcoin.

How to value Bitcoin with a stock-to-flow Model

Plan B is the pseudonym of a Bitcoin analyst who shot to fame in 2019 after publishing a Bitcoin price prediction model using an existing approach for valuing precious metals - called stock-to-flow.

If you take a look at PlanB’s twitter handle - @100trillionUSD - it does give you a clue that he is a big Bitcoin fan, taking a swipe at the US Dollar by transposing it to the infamous 100 trillion Zimbabwean Dollar. To his credit, however, he lets the numbers do all the talking, publishing all his calculations and inviting critique.

Stock-to-flow again focuses on measuring the scarcity aspect of a store of value but aims to measure not just overall stock - as in our simple Gold supply model above - but total stock relative to the change in supply (which is described as the flow). 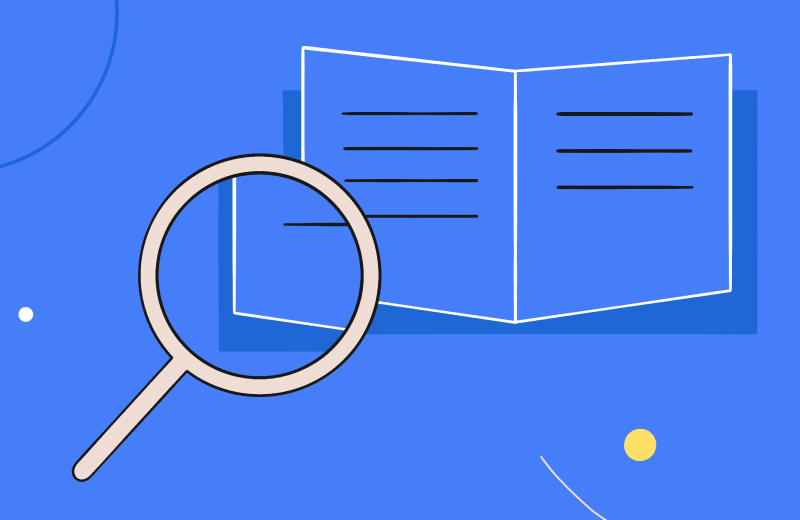 Stock-to-flowA measure of scarcity by comparing existing supplies of an asset to the flow of new production e.g existing stock of gold divided by the yearly production of new gold.

The equation is simply stock/flow i.e how much of the asset exists, divided by the new production of that asset within a given time period.

So PlanB simply calculated the stock to flow for precious metals because total supplies are known, and importantly, so are the rates of mining, which are relatively consistent. We can look at the numbers PlanB produced back in 2019. Our numbers above for the stock of gold and its price are for the end of 2020 and April 2021, hence the difference.

What is crucial about Gold’s stock-to-flow is that it remains constant because it is virtually indestructible and supply growth is what is known as inelastic - it really doesn’t change much even when price goes up or down.

What is so clever about PlanB’s model is that because Bitcoin has a known supply rate, a stock-to-flow ratio can be derived and then compared against historical price using regression analysis (too complex to go into here). 6.25 bitcoin are created every 10 minutes as a reward for miners adding new blocks, and this rate halves every four years.

You can get the full details of PlanB’s bitcoin stock-to-flow model here, but essentially it shows a statistically significant relationship between SF and market value - not just for Bitcoin but for gold and silver and has so far proved remarkably accurate. 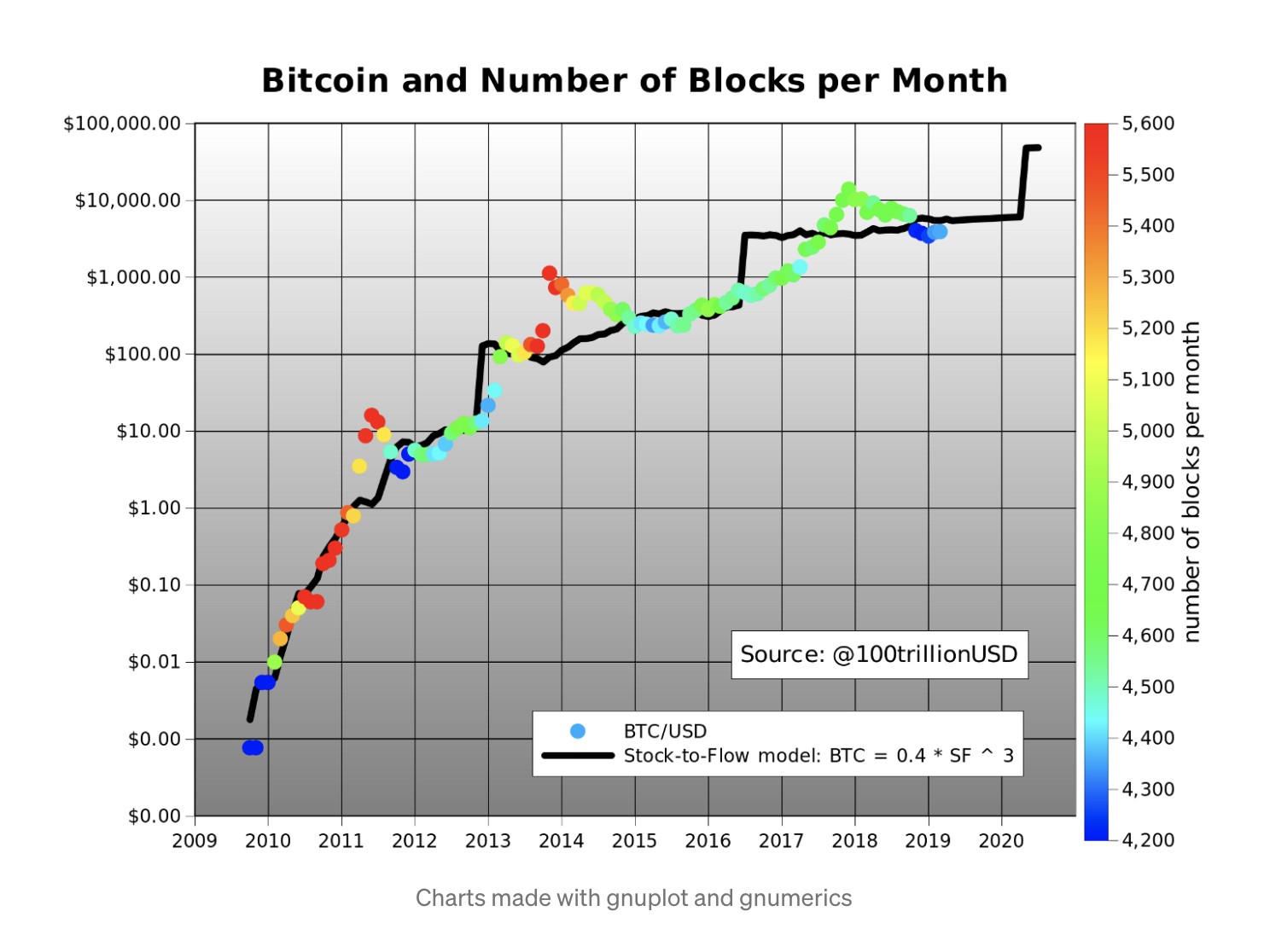 His image overlays block production using different colours to highlight difficulty adjustment and how many blocks are actually added per month.

Not content with a model that seemed to work like clockwork and received wide praise, PlanB came up with a second model in April, 2020 - Stock-to-Flow Cross asset model.

How to value Bitcoin with cross-asset stock-to-flow Model

PlanB’s original stock-to-flow model uses data for the price of Bitcoin at specific points in time and the known Stock-to-flow value at that point in time. About a year later he updated the model. There is a famous saying, ‘All models are wrong, but some are useful’

Though his original stock-to-flow bitcoin price prediction model was proving accurate, he felt that a time series approach might not be the best way of looking at what gave Bitcoin value. So instead he moved to a new model - BTC S2F cross asset model - S2FX for short. It introduced the concept of phase transitions.

I solidify the basis of the current S2F model by removing time and adding other assets (silver and gold) to the model.

Again, go read the whole paper here, but the TL;DR is that his previous model - using time series - identified four clear clusters that he associated with specific phases in the development of bitcoin.

Naturally this attracted some criticism given that it adds an element of subjectivity, though the clusters themselves appear pretty clear, the phases can never be proven.

He could then add other assets to his model - gold and silver - and the idea that these phases would mean that the dynamics of price would be different within each phase.

The phase transition argument is supported by other popular models around adoption of new technologies which show that growth isn’t linear but exponential related to the dynamics of phases of change. The Gartner Hype Cycle is an example of this.

Skipping a lot of the mathematical complexity of S2FX, the addition of the phase transition idea dramatically increased his prediction for the price of Bitcoin which he estimates will reach $288,000 within the current halving cycle (2020-24). So far his model is proving scarily accurate.

How to value Bitcoin based on the risk of fiat collapsing

So far we’ve looked at models that are focused on measuring Bitcoin’s scarcity against that of existing stores of value - mainly gold. We started with something very simple, a straight comparison with existing supplies of gold, and then getting more complex by thinking about how much stock changes over time - stock-to-flow - courtesy of PlanB.

This model takes a completely different risk-based approach. Its creator, Greg Foss, is a specialist in the Bond Markets. Bonds are what are known as fixed income assets - they pay out a fixed return over a set time (maturity). That return is based on the risk of whoever issues the Bond not paying out.

The biggest Bond issuers are nation states. The US is the biggest issuer of Bonds, which are categorised by maturity - the time period over which the bond provides a return. The longer the maturity, the higher the return, because risk is inevitably greater over time. But what is that risk and what has it got to do with how you value Bitcoin?

Firstly, the Bond return has to compensate for the impact of inflation. If you get 2% a year on a bond for 10 years, but more than half that time inflation is over 2%, you are actually losing money.

Secondly, the return has to compensate for the risk that the issuer may simply default. Yes, that means the risk that the USA, the world’s biggest economy and issuer of the global reserve currency, would default on its financial commitments.

This may all sound fanciful, but this risk is already quantified in something called Credit Default Swaps. They are a complex financial derivative that essentially provides insurance against what is called counterparty risk.

What this means is if I take a loan out with a bank, there is a risk I (as the counterparty) may not be able to make my repayments. The bank can find insurance elsewhere for that risk, and so long as the premium is less than the interest I pay, they are still making money, without exposure to me failing to pay back their loan.

Credit Default Swaps work in a similar way, and in the case of governments, quantify the risk that a specific national currency might default. It happens more often than you might think. What Greg Foss has done is used this concept to work out the likelihood of the US Dollar collapsing and derive a value for Bitcoin as a hedge for that risk.

Foss has done the rounds on many well known bitcoin podcasts including the Bitcoin Fundamentals, when he explained his valuation logic. You can see it in the show transcript (start at 40 minutes).

I think that Bitcoin has intrinsic value based on the credit default swap market. That number is in my opinion…... between 110,000 and 160,000 US dollar per coin right now, depending on CDS [Credit Default Swap] spreads.

How Foss got to that number, paraphrasing his explanation to try and keep it simple:

On the basis of his Credit Default Swap Bitcoin price prediction model Greg Foss produced a Bitcoin price of between $110,000 and $160,000 based on current conditions.

This article will keep adding ways to value bitcoin as they emerge, but what is interesting is that those suggested here are all above six figures. These chime with predictions that have recently come from other sources:

These models are starting to get traction outside of crypto's echo chamber too.

Before you run off and sell everything you own to invest in Bitcoin, it is very Important to add a note of caution, these are just predictions. As mentioned already, all models are inherently wrong, no one knows what will happen to Bitcoin’s price tomorrow, next year or ten years from now. There are plenty of people who predict its price will collapse, from Bill Gates to Peter Schiff and plenty of respected economists,

Nassim Nicholas Taleb, author of a hugely popular series of books on understanding risk, recently change his position on Bitcoin, simply because he feels it fails the stability test for sound money. Reading the common criticisms of Bitcoin might help.

It is important to have an open mind, look at both sides of the argument, rather than only taking as gospel models that produce a six-figure Bitcoin price prediction. Above everything. Do your own research. This isn’t investment advice but there are plenty of smart people predicting Bitcoin's price has plenty more upside..

Is Bitcoin Bad For The Environment?

How DEFI achieves such huge yields