Summer is here, and though thanks to Covid you may not be venturing as far on vacation as usual, it’s a perfect opportunity to kick back in the sun, and extend your crypto learning journey, by reading one of the best books about crypto. The Bitcoin Standard, by Saifedean Ammous is the most common recommendation for anyone wanting to understand why Bitcoin is such a big deal. Let’s find out why. 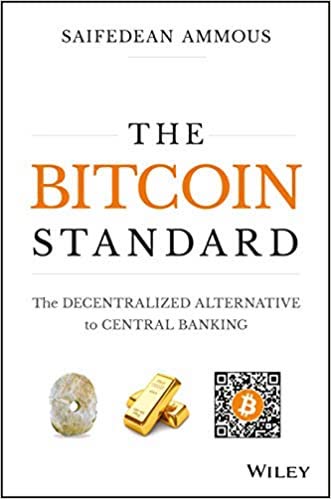 A different way to think about money

The title of the Bitcoin Standard is a play on words, referencing the gold standard, when the money in your pocket or bank account was backed by physical gold, rather than simply the authority of your government. If that is news to you, it will be just one of many ways in which this book redefines how you think about money and the role government plays in managing it.

Bitcoin is the newest technology to serve the function of money. - an invention leveraging the technological possibilities of the digital age to solve a problem that has persisted for all of humanity's existence: how to move economic value across time and space - The Bitcoin Standard

What is money, how did it emerge and evolve, what is the system of government money that is now the default, and what are the problems that fiat money poses? If you haven’t yet asked yourselves these questions, you will probably have struggled to understand the use case for Bitcoin.

The first sixty pages of the Bitcoin Standard will help establish that foundation and you’ll learn about the critical concept of time preference and wonder how you’ve lived your life in ignorance of something so important.

The Standard For Understanding Bitcoin

Ammous sets out a case for Bitcoin to replace the role that gold once provided as a store of value and collateral for global money, and has done such a good job, that the title now has dual meaning.

Ammous is an economist, and Bitcoin maximalist, so be warned, this isn’t a Bitcoin for Dummies type of guide book. It doesn’t require a degree in macroeconomics, just a willingness to zoom out and consider his unique perspective on the broader historical/economic context within which Bitcoin sits and his particular interpretation of how its use might evolve, presented from the viewpoint of an Austrian Economist.

Austrian Economics is a branch of economics strongly aligned with Bitcoin because one of its key beliefs is that the government should hold as minimal a role as possible in the economy.

Its belief is that given freedom to function, the market will correctly price everything, that includes money. Bitcoin is rooted in libertarian beliefs, where individual agency is critical and government seen as unnecessary. So the two ideas frequently overlap.

Understanding this perspective is important because Ammous pulls no punches in cataloguing the failures of capitalism - or social capitalism as he describes it - and attributing economic advances to the use of sound money (a concept you’ll become very familiar with), which some critics have challenged.

He is all for individual freedoms, and in fact sees that as intrinsic to sound money. If you believe in socialist ideas or at least the role of government as a safety net, you might be uncomfortable with some of the arguments, but you don’t have to take an all-or-nothing position on Bitcoin, Austrian Economics and Libertarianism.

Ammous holds passionate and controversial beliefs in many areas. Take a look at saifedean">his twitter feed and you can see his strident views on global warming, wearing masks and diet.

This is probably the only criticism of The Bitcoin Standard. It is written from the heart and in places that spills over to something close to personal grudge - particularly when he shares his opinions on modern art and music. A better editor may have pushed Ammous to rein in the vitriol, but that fault doesn't detract from the overall value of the book.

There is a concerted attempt to take a balance view of Bitcoin as the final - and longest - chapter examines the common criticisms of Bitcoin, which are interesting to read with the benefit of hindsight. The Bitcoin Standard was published in 2018, and given the crypto industry evolves at lightning speed, the book will understandably have aged.

Bitcoin is a controversial subject, and though you don’t have to be a badge holding Austrian Economist to believe in its merits, it does throw up difficult questions about how money and government should function for the better of society.

This tension has been highlighted by a very public feud between Ammous and Nassim Nicholas Taleb, the celebrated author, who provided the original foreword to the book.

Having held a generally positive stance toward Bitcoin, Taleb recently declared that it was a failure as a store of value, given its inherent volatility.

Taleb is as forthright in his opinions as Ammous, so this soon became a full blown feud, with Ammous declaring that he’d made a huge mistake in involving Taleb, who he claimed ‘had never even read the book’. Ammous has since promised to provide a foreword by Bitcoin evangelist, Michael Saylor, in future editions.

This slanging match actually provides a perfect illustration of the way Bitcoin both divides opinion and requires proper consideration, something Taleb is probably regretting not doing before putting his name to this book.

Your challenge is to read the Bitcoin Standard with an open mind and a critical eye. Bitcoin is about agency. It is programmable money guaranteed to produce 21 million bitcoins by 2140 and enable them to be transacted without fraud or government interference. What the world chooses to do with it is not part of the instructions. Saifedean Ammous presents his own credible and entertaining view, read it and it should give you enough insight to develop yours.