What is on-chain analysis & what does it measure?

If you’re interested in bitcoin price movement, which is pretty much anyone who holds any BTC, then you may have started to notice more mentions of on-chain analytics in relation to predictions on future price. What is on-chain analysis and what does it measure? Let’s find out.

On-chain analytics has emerged as one of the most interesting uses of the freely available transaction data stored in the Bitcoin blockchain - hence the term ‘on-chain’. Its aim is to give Bitcoin traders another insight into where price might be heading based on transaction patterns, the type of Bitcoin holder making the transaction and where coins might be moving.

The myth of Bitcoin anonymity

To understand how on-chain analytics works we have to first debunk one of the biggest misconceptions of Bitcoin, which is the association with anonymity, secrecy and the inevitable assumption that it promotes illegal activity.

People are capable of quickly adapting to new technology when their behaviour doesn’t have to change that much, like switching from driving a petrol-powered car to electric. Cryptocurrency is both a new technology and new way of thinking about money, so the required change in mindset can make people fearful and resistant to it. The biggest consequence of this are widespread misconceptions of this new scary thing, the biggest being that Bitcoin is totally anonymous.

The truth is that Bitcoin (along with most other cryptocurrencies) is the most transparent payment system the world has ever seen. It is built on a decentralised public ledger - a blockchain - which no one entity controls and is open to anyone with an internet connection to view every Bitcoin transaction from the very first to the most recent, and everything in between.

On-chain analytics takes that data and filters, segments and visualises it, to discern patterns of behaviour that might help predict future Bitcoin price movement.

Raw transaction detail will tell you the origin of funds, and the destination within the context of the blockchain, which works using records called UTXOs - unspent transaction outputs - which you can think of as unique spendable chunks of bitcoin that are tied to a bitcoin address.

Bitcoin works by moving funds forward - spending them - from one unspent transaction, to another, with any change returned to form a separate new UTXO (spendable chunk). This unique forward-only approach is how Bitcoin avoids double spend; you can learn more about how Bitcoin transactions work here.

Each UTXO includes details of how much bitcoin was moved, when it was moved and when the UTXO spending the coins was created, data which gives on-chain analysts useful insight into the motivations of those moving it.

Looking at all UTXOs within a given time period in aggregate you can segment the distribution of all UTXOs by value - which is what one of the biggest providers in on-chain analytics, Glassnode, has done. 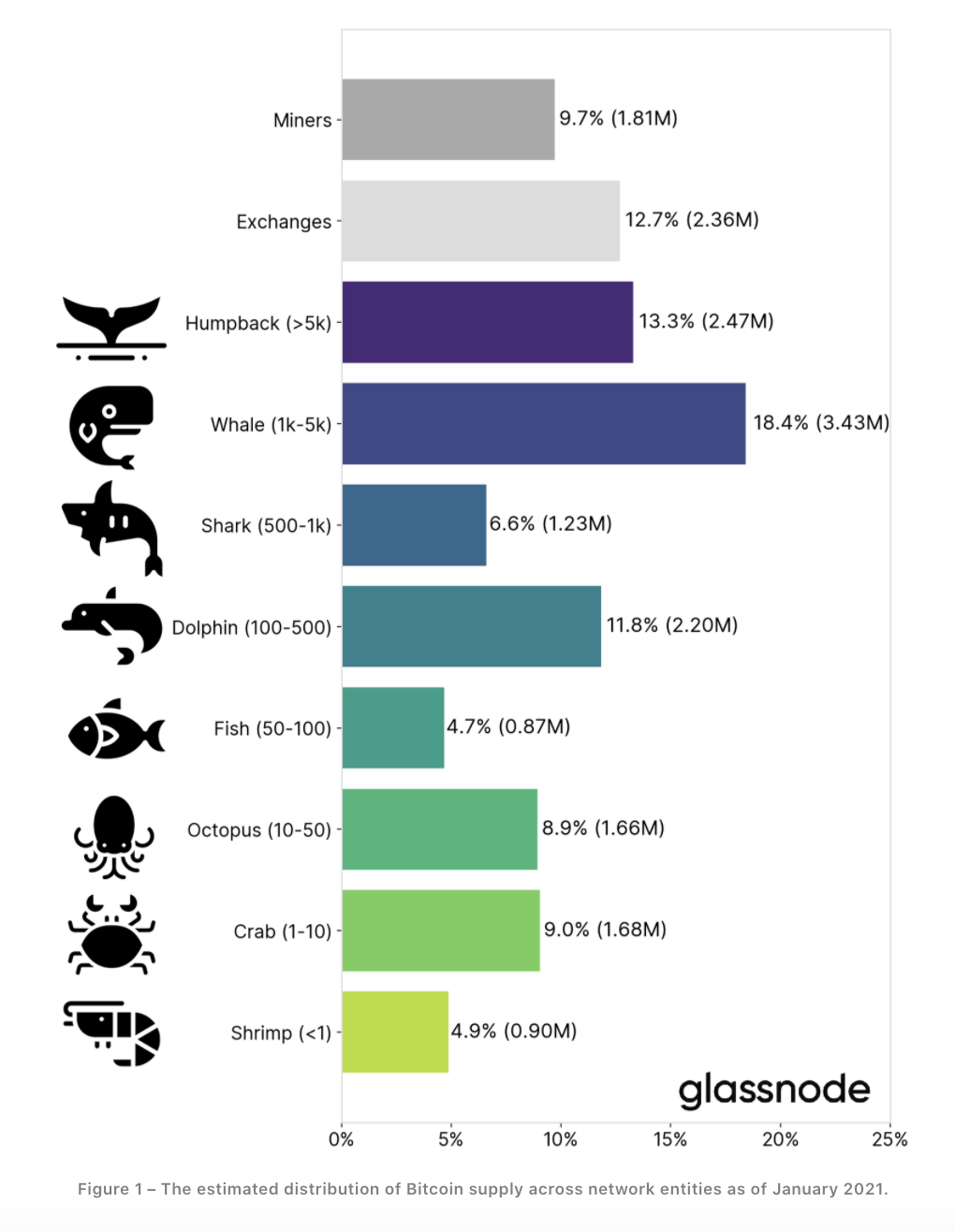 The age of UTXOs is useful in identifying patterns in adoption by looking at changes in new UTXOs or consolidation by concentration of aggregate bitcoin across fewer spendable balances.

On its own, that on-chain data would have its limitations, because UTXOs contain no personal information - no names, IDs, location - just a long string of random characters.

That is what has driven the false narrative of Bitcoin anonymity. The truth is that Bitcoin - and most other cryptocurrencies built using public distributed ledgers - are actually pseudonymous, which means on-chain analysis can derive a lot more meaningful insight.

You might think that we are just mincing words, but it is a really crucial difference. If something is anonymous, it cannot be connected to any real world identity. A transaction that is pseudonymous doesn’t itself carry any information about the person who carried it out, but that might be discovered by association.

In the case of crypto there are a number of ways that on-chain analytics can annotate UTXO movement to build dynamic address directories and generate the crucial connection to real world entities.

Given the goal of on-chain analytics is price movement, the origins/destinations that provide the most valuable information are venues for buying and selling i.e cryptocurrency exchanges, peer-to-peer platforms and Over the Counter (OTC) brokers.

This enables on-chain analysts to measure the flows in and out of exchanges. More coins flowing into exchanges is indicative of an increased selling behaviour, whereas outlfows, the opposite.

Miners can also be identified, and provide valuable insight because they tend to sell more in the anticipation of a fall in prices.

This is done in three ways:

The combination of raw UTXO data and the insight from pseudonymity means that on-chain analysts can draw much more meaningful conclusions:

The age/profile of coin movement - Short Term Hodlers selling has a very different significance to the committed Long Term Holders selling. Bear markets are associated with the latter, whereas the former is more likely from short term dips/shakeouts.

This can be derived by something called Coin Days Destroyed (CDD), which is a count of how many days before a coin moves. A UTXO with a value of 5BTC that hasn’t moved for 100 days would have a value of 500 Coin Days. If it moves 500 Coin Days would be considered destroyed, so a high aggregate number on a given day suggests a lot of value is on the move from large holders - Whales.

Profitability of coin movement - This combines price data with coin movement to establish whether coins were sold at a profit or loss; the latter would suggest panic buying. It's called SOPR - Spent Out Profit Ratio - because it divides the price in USD of a spent UTXO by the price when the UTXO was created. A value over 1 suggests coins were, on average, sold at a profit and below, at a loss.

On-chain analysis is a relatively new method of price prediction so new ways of analysing and combining metrics are emerging all the time. It should be considered a one-stop shop for price analysis, rather a complement to Technical and Fundamental Analysis. Interestingly it has already been incorporated in the standard Trading View platform, illustrating how quickly it has gained legitimacy, but it does have its limitations and its critics.

Market Value vs Realised Value - You don’t need to employ on-chain analytics to calculate the Market Capitalisation of a specific coin. Just times the number of circulating coins by the current price. As a metric it is a bit limited in what it can tell you about true value. On-chain analytics can compare Market Value (MV) with Realised Value i.e aggregate the value of UTXOs based on the last time they moved.  This gives you MVRV - dividing MV/RV to produce a ratio of ‘fair’ value. The higher the ratio, the lower the realised value, implying the price is below fair value.

The limitations of on-chain analytics

The methods that on-chain analysis uses to tie addresses to known entities isn’t 100% fool proof. Exchanges use dynamic addresses which means tracking millions of addresses within a growing set and would assume that Clustering is completely accurate, which it isn’t.

The Bitcoin system of UTXO enables on-chain analysts to get a very granular view of coin movement, but that approach isn’t used by all cryptocurrencies. Ethereum, which accounts for a huge amount of transaction volume, and is the basis of so many other cryptocurrencies, uses an account-based model, closer in behaviour to a regular bank account which means that most of what we discussed here doesn’t apply.

One of the most obvious limitations of analysing blockchain data is that datasets aren’t very old, because the asset class isn’t very old. There isn’t one source of truth for the data which can be spread across multiple blockchain networks and where it is pulled from exchanges, may be tainted by what is known as ‘wash-trading’ which artificially inflates the volume of trading to improve an exchange’s credibility.

The value of on-chain analytics comes in aggregate, so isn’t necessarily useful for precise trading, but provides leading indicators - signals ahead of price movement - but without being able to nail down specifics.

On-chain analytics is interesting as another source of price signal, but that is just one use of the data it produces. There is an entire industry analysing data across multiple blockchains for use within compliance and crime. Regulators and law enforcement are taking an increasing interest in the movement of cryptocurrency which can be used to track the proceeds of crime or unpaid taxes.

Mastercard recently announced that they had purchased one of the prominent blockchain analytics providers - Cipher Trace - illustrating how commercially valuable that information is.

If this is starting to sound a little creepy then consider what will be possible when governments like China fully launch their Central Bank Digital Currencies - CBDCs - which will give them almost unlimited access to the spending habits of citizens, as all addresses will be tied to identities.

Understanding what on-chain analytics is and how it is achieved can broaden the amount of information you might use to consider future price movement of bitcoin. More importantly, it not only destroys the myth that blockchains are anonymous but highlights how their extreme transparency is being used for commercial gain as well as an increasing level of government intrusion on financial privacy.

When is the right time to sell your crypto?