What is bitcoin dust & why is there so much of it?

Dust is simultaneously everywhere and nowhere. Tiny remnants of everyday life swirling in the air and collecting under sofas waiting to be swept up and disposed of. Bitcoin has its own version of dust, remnants of transactions that are easy to see, but much harder to dispose of. But what exactly is bitcoin dust and why is there so much of it?

Although simple to describe, understanding bitcoin dust can be a challenge, though there is a direct similarity to the money we are all used to.

With regular (fiat) money, if you spend cash you’ll receive change in a physical form - smaller notes and some coins - while if you use a card, or some digital payment method, just see your account balance deducted.

The smaller physical coin denominations you accumulate are becoming harder to spend because inflation means that there is literally nothing you can buy with a few cents or pennies. Some countries even give you sweets in return rather than coins.

Surveys have suggested six in 10 of UK 1p and 2p coins are only used once before being put in a jar or discarded, while one in 12 is thrown into a bin.

Similarly, any account holding financial value that falls below a certain level essentially traps what is left until new funds flow in, because there is nothing you can spend it on, and the cost of moving it exceeds its value.

You might encounter a similar problem returning from a foreign holiday with small amounts of physical currency that end up in a drawer, because it is impossible to exchange them.

The crypto world suffers from a similar problem and calls these unspendable remnants of money dust. But wasn’t crypto supposed to fix the issues of fiat money, and if so, why is there so much of this unspendable bitcoin dust?

What is bitcoin dust?

So-called bitcoin dust is the name given to the small denominations of bitcoin left over or unspent in a transaction. But why are they left over, you might wonder? Can’t you just transfer or exchange 100% of your bitcoin holdings every time you transact?

Unfortunately, it’s not that simple. You see, though cryptocurrencies work to maximum supplies of coins - 21 million in the case of Bitcoin - the accounting system doesn't relate to coins or specific fractions of coins in the sense we are used to with regular money. Bitcoin transactions simply work on a system of Unspent Transactions (UTXOs) - amounts left over after funds have moved.

Each bitcoin is divisible into 100 million smaller units known as satoshis – named after the asset’s shadowy creator. Bitcoin was fractionalized in this fashion in order that its monetary supply could cope with increased adoption. Thus, you can technically own 0.00000001 BTC and still be a bitcoin holder.

Though Bitcoin - and most other cryptocurrencies - work to eight decimal places, many transactions start from the fiat world, or at least use fiat money as a reference, which uses just two decimal places. So as soon as you on ramp - the term for turning fiat into crypto - you are almost certain to start with an uneven balance.

This is compounded by fees charged for deposits, withdrawal and exchange, which all work on round commission basis which, given the eight decimal precision, produce an irregular balance.

Sending crypto is never as simple as saying remove my whole balance because network fees are fluid - changing all the time - and many wallets allow you to choose what fee you pay. Any manual input is almost certainly going to lead to over/underestimation, with the result being some pesky dust left behind.

And once an amount left behind falls below the cost of transacting the only way it can ever move is if more funds flow in. However, more dust will inevitably be left behind in its wake. In some ways, bitcoin dust is similar to the lost crypto rendered inaccessible due to misplaced private keys and the untimely demise of hodlers.

Bitcoin dust is, like real dust, all around us. The barista serving you a chai latte on your morning commute probably has some bitcoin dust in her mobile wallet. The IT guy in your office created bitcoin dust when transferring crypto from his Binance wallet to his Ledger hardware wallet last night.

Think of all the accounts with exchanges, crypto casinos or faucets and the tiny amounts of dust they hold.

The pennies collected in a jar possess some  value, though it is becoming increasingly difficult to extract it. If you save them in a jar you generally have to pay a chunky fee to convert them into paper money using a special kind of vending machine. Most banks have policies that restrict deposits of coins, while shops will discourage you from paying with huge bags of coins.

The situation is much worse for bitcoin dust which is economically unspendable until such time as its value is greater than the transaction fee required to move it.

The size of the bitcoin dust problem

Estimates suggest that about 20% of bitcoin is lost or unspendable, but what is the exact contribution of dust? According to data from Bitinfocharts, 51% of bitcoin addresses hold less than $50. That is only 0.02% of coins in circulation but amounts to almost $210million in value.

They also estimate that 4.6 million addresses hold less than $1, which is definitely in the dust bracket given the median Bitcoin transaction value at the time of writing is about $14.

The number of Bitcoin addresses holding less than $1 in value

It is best practice to use a new address every time you make a Bitcoin transaction, and there is no cost to do so, which certainly compounds the issue. 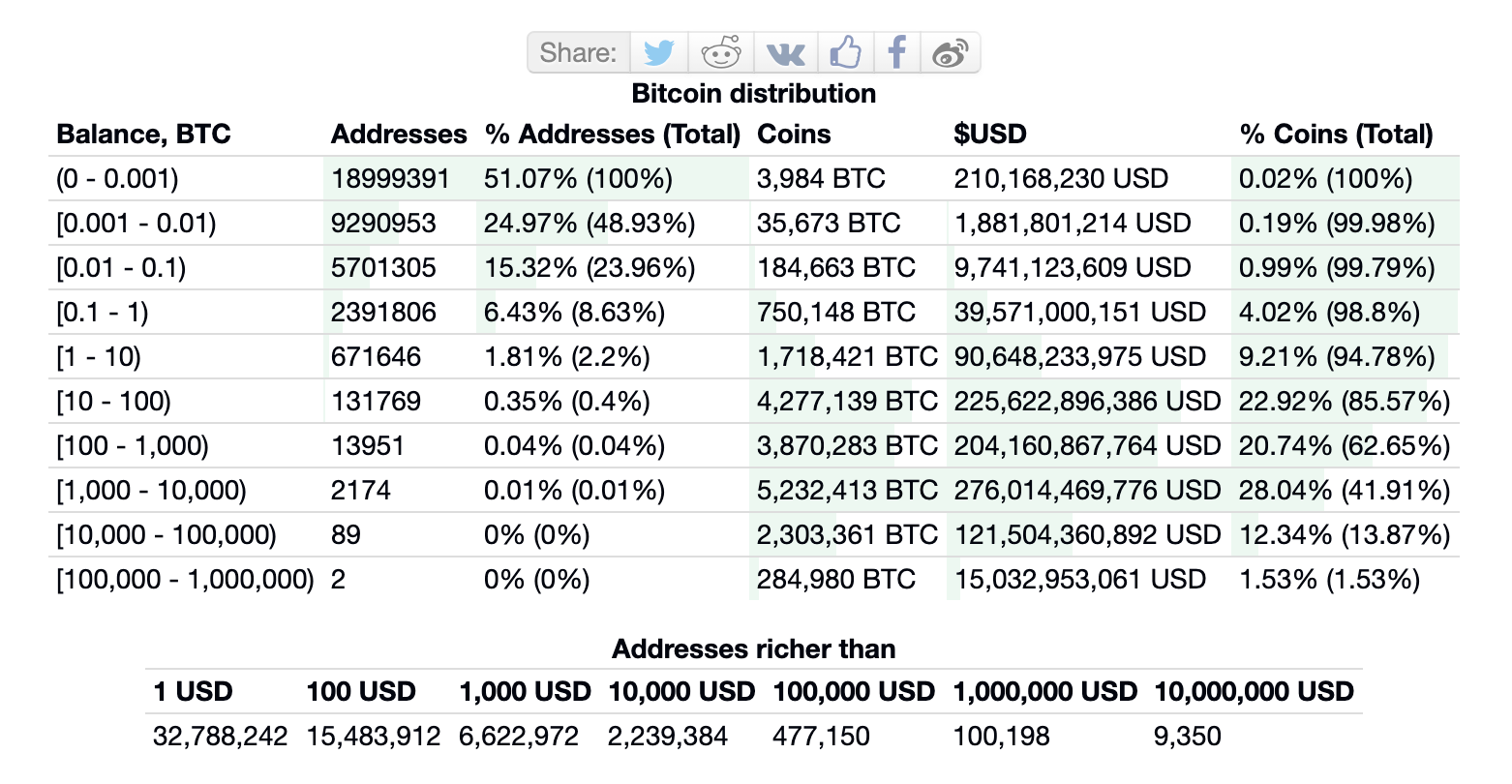 Can you get rid of bitcoin dust?

Oftentimes, new crypto users frustrate themselves by researching how to get rid of crypto dust. The fact is, attempting to make a bitcoin transaction without dust is as futile as trying to surf a wave without causing ripples and spray in the water.

In any case, many Bitcoin maximalists believe that the cryptocurrency will continue to appreciate in value. Meaning today’s dust could be tomorrow’s nugget. Providing, of course, that transaction fees don’t rise even faster.

If you believe the Bitcoin maximalists, you should have a more charitable view of the satoshis collecting dust in your crypto wallet. Sure, you can’t spend them right now – but like the bitcoins drip-feeding out of faucets in the early 2010s, they could have serious value in a few years’ time.

There are other options, particularly if you want to clean crypto dust. Users of Crypto.com's app, for instance, can convert cryptocurrency dust to the platform’s native CRO token, free of charge. The process is described here while Binance offers a similar service on its exchange, allowing users to swap crypto crumbs for BNB. But that is only of use for dust accumulating within those services.

Given the number of bitcoin wallets, the age of the network and the rising value of BTC, trace amounts of dust bitcoin add up to a very significant sum. If all bitcoin dust could be magically swept into a single wallet, the holder would be a multi-millionaire.

Keep Your Eye On The Mempool

Our cryptocurrency knowledge base explains how Bitcoin works, so we're not going to go deep into that here. But in summary, like any financial system it has a settlement layer where transactions are processed. In traditional finance this is centralised - happening between banks - with Bitcoin it is decentralised, with participants across a network processing transactions and maintaining a consensus about what updated balances of addresses should be.

Part of this settlement payer is something called the Mempool. All Bitcoin transactions go to the Mempool waiting for a Miner - one of the key network participants - to pick them up and add them to a new block, to form part of the unchangeable blockchain history.

Sometimes the Mempool gets congested, and fees goes up, as Miners pick and choose transactions that are most profitable. On other occasions the Mempool gets cleared, driving down fees. When this happens, you have a golden opportunity to move some of that bitcoin dust you've accumulated as it becomes much cheaper, in dollar terms to do this.

If you keep an eye on services that monitor the Mempool, you can get ready to take advantage of ultra-low fees, and sweep up some of that dust.

Though bitcoin dust is frustrating, it is harmless, but small amounts of crypto can, in certain circumstances, be utilised in a form of scam.

A dust attack is the name given to a form of malicious activity wherein scammers seek to deanonymise crypto owners by sending minuscule sums of cryptocurrency to their wallets. It works with cryptocurrencies that are exceptionally cheap to transact, and is a bit like spamming a huge number of randomly generated mobile numbers to find those that are active.

The goal of such scammers is to monitor the transactional activity of recipients using chain analysis, and thereafter unmask the person or company behind the wallet. If successful in this endeavor, they may attempt to extort the individual or launch an opportunistic phishing attack.

Although crypto dust attacks sound very scary, they are quite uncommon. Moreover, dust deposits are highly unlikely to lead to anyone being deanonymised.

As long-time Bitcoin developer, Jameson Lopp, notes, dusting attacks “would most likely only be performed by a law enforcement investigator who is trying to track funds tied to a crime.”

In October 2020, scammers started a dusting attack on the Binance Smart Chain (BSC) by sending tiny amounts of BNB to multiple addresses, leaving a link to a malicious website in the transaction Memo.

Bitcoin’s dust problem is greater than most because the transaction fees are some of the highest, relative to the value of BTC. Other cryptos work with different methods for validating transactions - known as consensus methods - which are much cheaper, so can utilise smaller amounts.

Maybe someone will create a dustless crypto, which ensures every trace is mathematically neat and tidy, with no trace left behind.

Until then, there is no point worrying about dust, or being frustrated by your inability to access it. Just let it accumulate. A few years from now, those accrued satoshis might just buy you a coffee – or perhaps even a small car. That’s the beauty of Bitcoin: it tends to reward people who have a low time preference. Until then, keep calm and collect dust.

The most common crypto scams & how to avoid them