It's hard to believe that Bitcoin is just 12 years old. In that short time it has moved from an obscure experiment to an asset with a valuation over $1 trillion. It’s been far from a straight road, so we’ve try to highlight Bitcoin’s ten most dramatic moments. 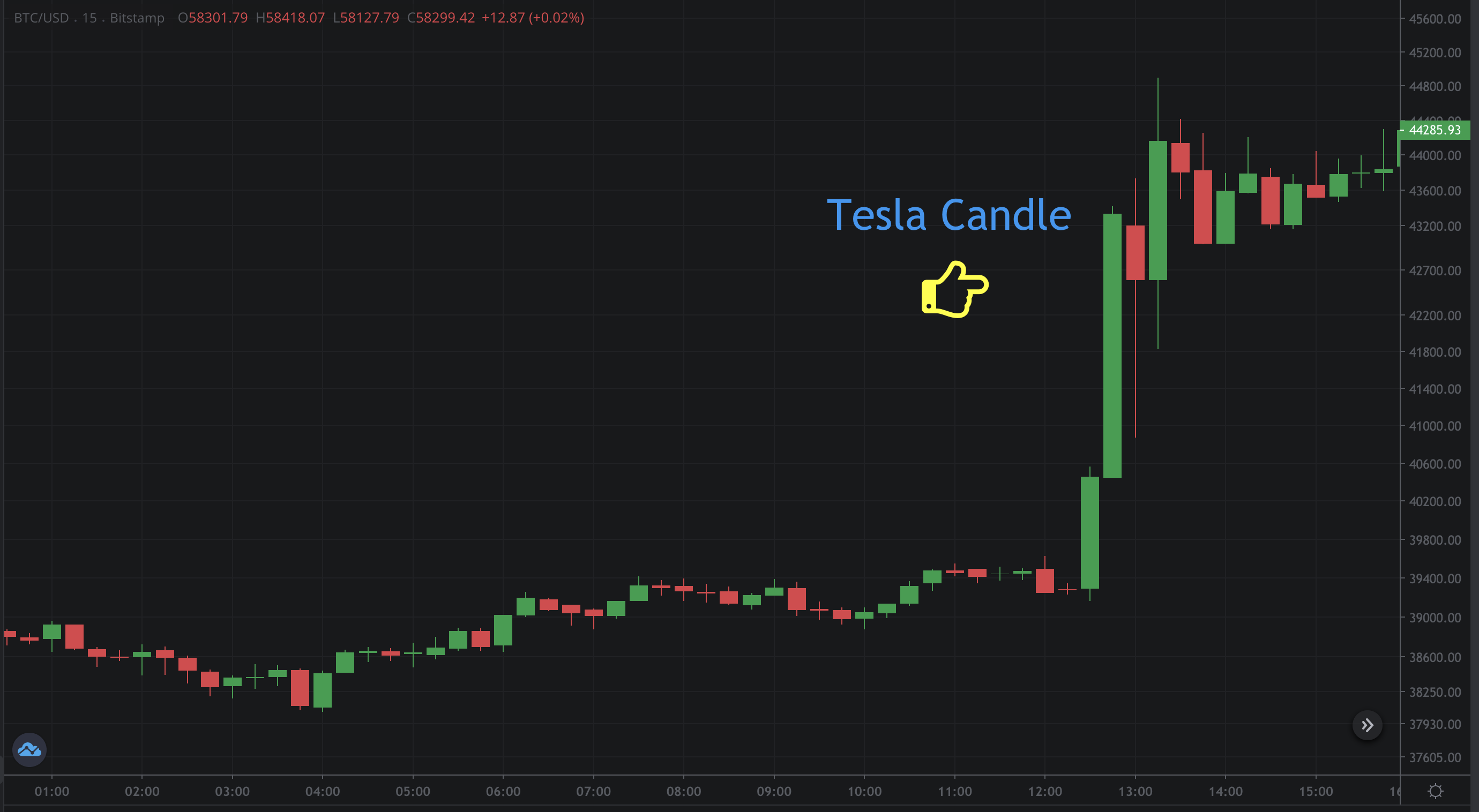 The significance of this isn't just limited to ATHs and record candles; however, with Tesla's investment representing a huge corporate bull position for Bitcoin. When filing with the SEC, Tesla described the investment as a way of achieving "more flexibility to diversify further and maximise returns on our cash."

The one day rise in Bitcoin's price reacting to Tesla's $1.5bn investment in BTC

This decision highlights how Bitcoin is becoming an increasingly respected asset class for corporations. It could mean that significant institutional investment will start to pour into the crypto world and fuel massive growth of the industry. One thing's for sure; this moment certainly marks a great start to 2021 for Bitcoin.

The drama of the huge surge in price that Tesla's investment in Bitcoin gave in February, was matched by a 10% drop when just 49 days later Elon Musk did a U turn. He announced that Tesla would no longer accept Bitcoin as payment for Tesla purchases given concerns about Bitcoin's energy consumption:

Understandably, this left the Bitcoin community somewhat perplexed. Surely Tesla had done their research on Bitcoin's carbon footprint prior to purchasing $1.5 billion worth? What about Musk's support for Dogecoin, which is also uses a Proof of Work mechanism for confirming transactions and issuing new coins?

Crypto Twitter influencers weighed in with their own take, many assuming that Tesla had been pressured by the US Government given the large subsidies they receive.

Whatever the motivation for Tesla's change of heart concerning Bitcoin, it poured petrol of the smouldering argument of Bitcoin's impact on the environment.

3. The Covid plunge: Price reacts to the pandemic impact in the US

Bitcoin started 2020 in equally dramatic fashion; however, instead of a bull run, the cryptocurrency saw massive price drops as the markets reacted to the Covid-19 pandemic. In the first week of March 2020, Bitcoin saw it's price half in just two days. 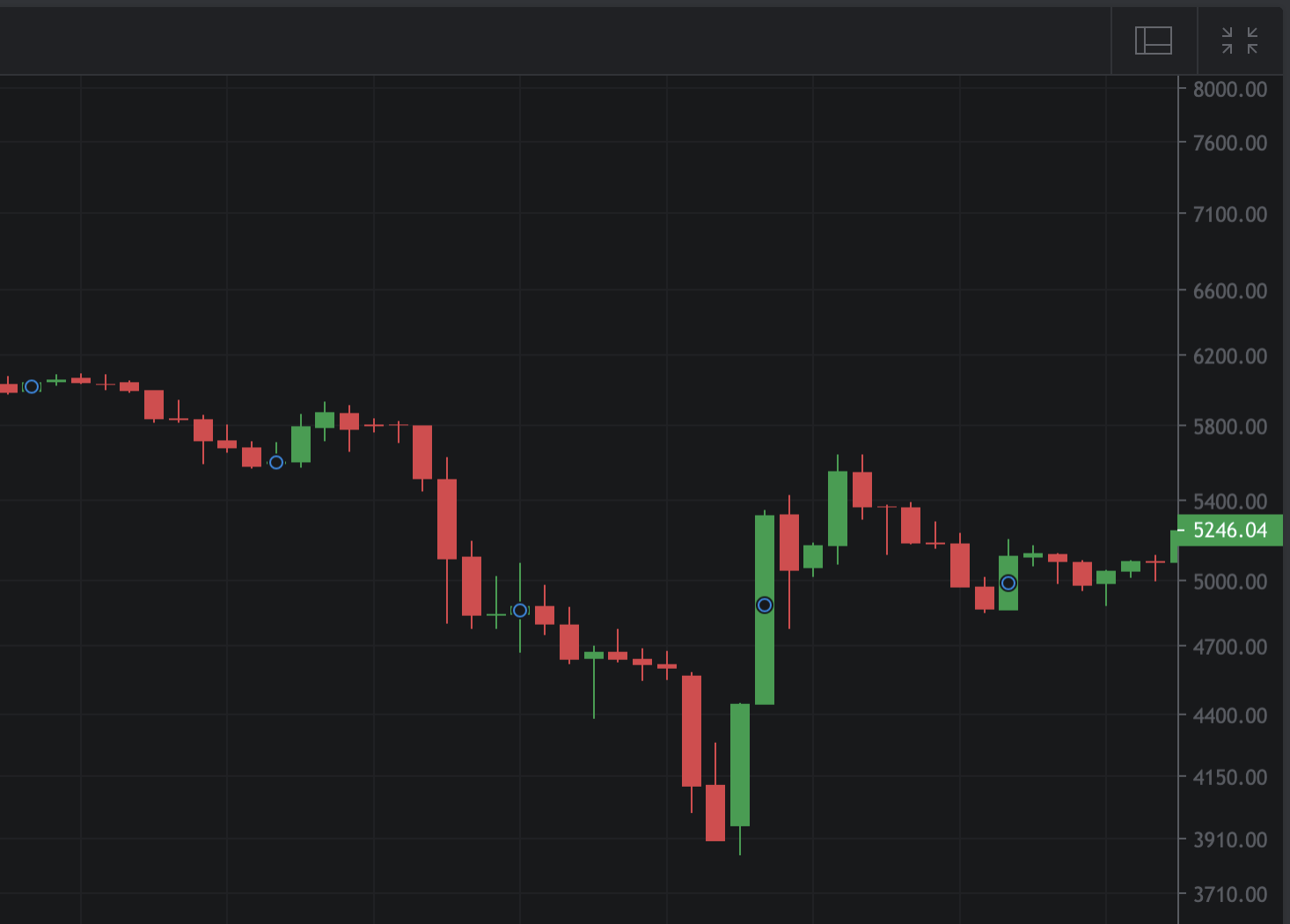 This moment puts Bitcoin's recent bull run into perspective. It was less than a year ago that BTC was trading at less than $4,000. Now, in 2021 the price is more than 10X that at over $47,000. This pace of change is par for the course in crypto as the industry is still in its early days full of innovation and experimentation.

Bitcoin’s covid plunge mirrored other financial markets in early 2020 as the world reacted to the pandemic and reminded hodlers that it is yet to fulfil its potential as an uncorrelated hedge to the existing financial system.

The decline in Bitcoin's price over two days due to the concerns of economic impact of Covid19.

One of the fascinating aspects of Bitcoin is the unknown identity of its creator. The real identity of Satoshi Nakamoto - the pseudonym used by the cryptocurrency creator (s) - has been speculated about ever since the release of the Bitcoin whitepaper in 2008.

In December 2015, two parallel investigations by Wired and Gizmodo suggested that Craig Wright may have been the inventor of bitcoin, leaving the crypto world buzzing.

The articles claimed that Wright had digitally signed messages using cryptographic keys created during the early days of bitcoin's development. The keys are inextricably linked to blocks of bitcoins known to have been created or "mined" by Satoshi Nakamoto.

Just hours after these articles were published, Wright's home in Australia was raided by the Australian Federal Police as part of a tax fraud investigation.

Since the articles, Wright has failed to prove definitively that, he is the man behind Satoshi Nakamoto though maintains to this day that he is. Other notable cryptographers have backed his claims - such as Ian Grigg - stating that Satoshi was a team and that Wright was the team leader.

After threats of serious jail time, Wright published this message in 2016: "I am the source of terrorist funds as bitcoin creator, or I am a fraud to the world. At least a fraud is able to see his family. There is nothing I can do."

In 2019, Wright began suing people who claimed he was a fraud for libel - most notably Ethereum inventor Vitalik Buterin and Roger Ver, an early bitcoin adopter. It's unlikely that we'll ever get a definitive answer to the Satoshi Nakamoto question, but that's part of why it's so interesting.

At its peak, Mt. Gox was responsible for 70% of all bitcoin transactions. The Tokyo-based exchange began in 2011 as a card trading exchange and eventually morphed into the world's largest cryptocurrency exchange. So when the exchange was hacked and had to file for bankruptcy in 2014 one of Bitcoin's most dramatic moments occurred.

Mt Gox halted all Bitcoin withdrawals on 7 February 2014, and the website went offline on 24 February 2014. After this, the company filed for bankruptcy in Japan on 28 February and in the US on 9 March 2014.

The number of Bitcoin stolen in the Mt.Gox Hack in 2014

Before 2014, Mt Gox had experienced a minor hack in 2011, but nothing compares to the size of the 2014 attack. It was the first significant crypto hack and remains unresolved to this day.

On 20 March 2014, after the bankruptcy proceedings started, Mt Gox confirmed that approximately 200.000 BTCs were found in old-format wallets. The whereabouts of 650.000 BTCs is still unknown and subject to parallel investigations pending in different jurisdictions.

Back then, hardware wallets for cryptocurrency didn't exist but now - partly due to these hacks - they are seen as a vital part of crypto security, especially when handling considerable amounts.

Before 2021, 2017 was the last crypto frenzy that saw Bitcoin rocket to new ATHs. Surging from around $900 to near the $20,000 mark in under a year remains one of bitcoin and crypto's most positive moments. 2017 was the year that Bitcoin grew up and started to attract serious attention from global finance.

Because the hype was so widespread, many altcoins also saw meteoric rises such as Litecoin. 2017 confirmed that demand for crypto was real, global and here to stay. Since then, the space has been flooded with projects, improving infrastructure, accessibility and much more. This, in turn, has created the market conditions necessary for Bitcoin's most recent bull run of early 2021.

Without 2017 proving the power of Bitcoin and the demand for crypto, Bitcoin, as it is today, wouldn't be possible. Institutional-grade bitcoin custody solutions have been built by companies like Coinbase, Gemini, Fidelity, Anchorage and BitGo, among others and it all started with the bull run of 2017.

May the 22nd is one of crypto's biggest celebrations. Now known as Bitcoin Pizza Day, it commemorates Laszlo Hanyecz paying 10,000 Bitcoin for two delivered Papa John's pizzas. Organised on bitcointalk forum, the Florida man reached out for help. "I'll pay 10,000 bitcoins for a couple of pizzas… like maybe 2 large ones, so I have some leftover for the next day," Hanyecz wrote.

Today, those 10,000 bitcoins are worth an eye-watering $480 million. This story endures because it shows so well how far Bitcoin has come since the early days. Those two pizzas have been getting more and more valuable practically ever since they were ordered - who knows how much 10,000 bitcoins will one day be worth?

8. Publishing of the White Paper

A list of significant Bitcoin moments wouldn't be complete without the landmark publishing of the Bitcoin whitepaper. The proposal that started it all, authored by the infamous Satoshi Nakomoto. On 31 October 2008, a link to a paper authored by Satoshi Nakamoto titled "Bitcoin: A Peer-to-Peer Electronic Cash System" was posted to a cryptography mailing list.

This paper proposed the world's first fully digital native sound currency and named its proposal 'Bitcoin'. Consider the global environment when this paper was published, the world's economies in the aftermath of the biggest financial crash for decades. Understand this, and you can begin to understand Bitcoin's radical proposal for shifting monetary control away from centralised institutions and into the hands of distributed users.

After the whitepaper was published in 2008, the next big crypto milestone was implementing Satoshi Nakomoto's proposed protocols. Nakamoto implemented the bitcoin software as open-source code and released it in January 2009. Known as the "Genesis Block" this was the first block to be mined and added to the Bitcoin blockchain.

Famously, Nakamoto embedded in the coinbase of this block the text.

"The Times 03/Jan/2009 Chancellor on the brink of second bailout for banks".

This note references a headline published by The Times and certainly implies what Nakamoto had on his/her/their mind when implementing the Bitcoin protocol for the first time.

As Bitcoin continues to grow into a serious alternative asset class, these two moments: publishing the whitepaper and mining the genesis block will be increasingly seen as monumental landmarks in global financial history.

So since then, how much has Bitcoin grown as an asset class? Well, the cryptocurrency looks set to hit $1 trillion in market cap passing $900 billion for the first time on 12 February 2021.

The Crypto industry as a whole is currently at $1.5 trillion - which is beginning to rival Apple's market valuation of $2.27 trillion. Much of this growth has been rapid and recent, with an estimated $500 billion being added in 2021 alone.

The amount Bitcoin's marketcap has grown in 2021 alone

Crypto and Bitcoin's sheer size these days means that the industry is becoming increasingly harder to ignore. Massive institutional investment looks set to be on the horizon, which could see these vast growth rates sustained not only for Bitcoin but across the crypto industry.

To round out this list, we have a moment from the very early days of crypto. In November 2011, Bitcoin reached value parity with the US dollar. This may not seem like a huge milestone when compared to the numbers in the headlines today, but for Bitcoin, this was essential.

Just a couple of years after launching, the technology proved that it could function well enough as sound currency to have it's value be equivalent to 1 US dollar.

Relative to now, the market value of Bitcoin was tiny back then, and usage was scarce, it was still very much underground. Since then an entire industry has blossomed, but that wouldn't have happened without Bitcoin proving itself on a small scale first.

Achieving parity with the US dollar showed that Bitcoin was a technology capable of opening up a whole new world of finance. Bitcoin has come a long way from 2011, but it's still only just getting started.

For a few days in April 2021 all that anyone in crypto could talk about was the Coinbase IPO. What price would the largest cryptocurrency exchange debut at, and what would that say about the growing maturity of the sector?

The markets gathered some serious momentum around the hype, hitting an all-time-high above $64,800 on April 14th mostly driven by retail frenzy. Coinbase's share price fluctuated widely in early trading on the Nasdaq, much like the cryptocurrencies it facilitates trading for and settled below $300.

The market cooled too, in the following days, but the milestone is a key moment in the evolution of crypto. It gives anyone in the US with an online brokerage account indirect access to crypto and provides a benchmark to value other big names considering taking a similar public float. It will also provide key data on how Coinbase is performing in terms of use acquisition and revenue, both good barometers of the buoyancy of the crypto market.

If you only take one message away from these highlights of Bitcoin's journey, let it be this: watch this space, history is being made every day. We'll keep adding the big stories as they occur, and expect this article to grow and grow.

Is the Lightning Network the future of money?